Misinformation is information that is false, inaccurate, or misleading and is presented to be true (1). Misinformation can be spread on a variety of topics such as diets, cures for an illness, cosmetic procedures, or things like COVID-19 and vaccines.

Where does misinformation come from?

Information is all around us and comes from many sources such as news outlets, social media, academic research, observations, books, experiments, interviews, reports, speeches, and art.

Below are a handful of ways the interpretation or analysis of information from a primary source can lead to the surfacing of misinformation.

Sometimes misinformation surfaces due to a human error, such as incorrectly entering in data or misplacing pertinent information. These accidental errors can change the context and meaning of the information.

Oversimplification is another way misinformation can surface, which typically involves making a complex concept simpler than it really is by leaving out some or all of the important pieces of information. Take for example a report released in 2015 by a news outlet that said drinking one glass of red wine was the same as one hour at the gym, but the actual study is about how one compound found in wine could help maximize the benefits of exercise (4). The news outlet oversimplified the actual study by leaving out key details about what was actually studied and what conclusions were made.

Misinformation can also surface due to misinterpretation of the facts. The misinterpretation can be a result of misunderstanding the research results, cherry-picking statistics that support the argument, or creating misleading graphs or diagrams. Take for example the sample graphs below that are comparing Groups A, B, and C. The graph on the left makes it look like Group A is much larger than B and C. If you take a closer look, the vertical axis of the graph on the left starts at 50 versus 0, which makes small differences between the groups look drastic. The graph on the right shows an accurate depiction of the data because the axis starts at 0.

Exaggerations can also lead to the creation of misinformation. Typically, we see news outlets or people on social media stretching information to be larger, better, or worse than it really is just to grab attention. For example, a news headline that reads “New Drug Keeps You Healthy Forever!” grabs your attention. However, the article is actually about vitamins to help boost your immune system, which is definitely not a drug and does not mean you will be healthy forever.

Opinions and beliefs can shape how we process and share information. An opinion is an honest and personal interpretation of the facts or information presented, while a belief is a personal acceptance of what is true without basis in facts or evidence. Both are influenced by life experiences, perspectives, feelings, or desires and cannot be proven as right or wrong (5,6). Misinformation can surface from opinions and beliefs because of the likelihood of only sharing the pieces of information that align with those opinions and beliefs and leaving out the whole context.

How to Spot Misinformation 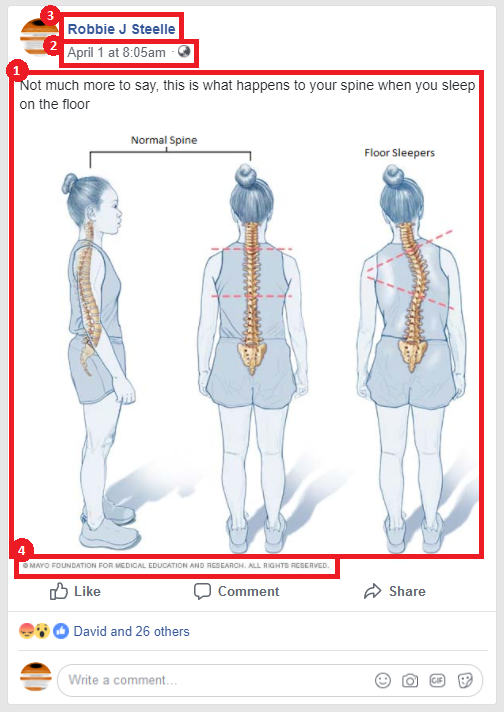 Why was this posted? Before we make a conclusion about why this was posted, let’s take a look at what we do know to be true: 1) The post was shared on April Fool’s Day, 2) There isn’t much additional explanation to accompany the post, and 3) The original image is actually a comparison between a normal spine and a spine with scoliosis. Based on these facts of the post, we can consider this was likely posted just to get attention and the information shared should not be taken as factual information.

Stop the Spread of Misinformation

If you get your news primarily from social media, try to take a few minutes to verify if the information is accurate before you share it.

If you are unsure if the information is accurate or not, simply do not share it. Be skeptical, check the facts, and help stop the spread of misinformation!

Our opinions and beliefs shape what information we typically engage with and share, while the information we engage with can fortify our opinions and beliefs. If you only get your news from one news source, then your perspective on certain topics can differ drastically from a neighbor who gets their news from a different source. Limiting where you get your information can hinder how you view the world and can also increase the spread of misinformation. It is important to learn about and understand perspectives other than just your own, which does not necessarily mean you need to agree with it.

Intentionally seek information from other sources to build your understanding and to expand your perspective of the world. More information builds context, which can lead to the reduction of misinformation.

How to Talk About Misinformation

When talking to friends and family who have misperceptions, we can ask questions to understand their concerns, listen with empathy, and offer guidance on finding sources of accurate information”

We can play a role in protecting and guiding others when talking about misinformation. Here are key points to keep in mind when engaging conversations concerning misinformation: