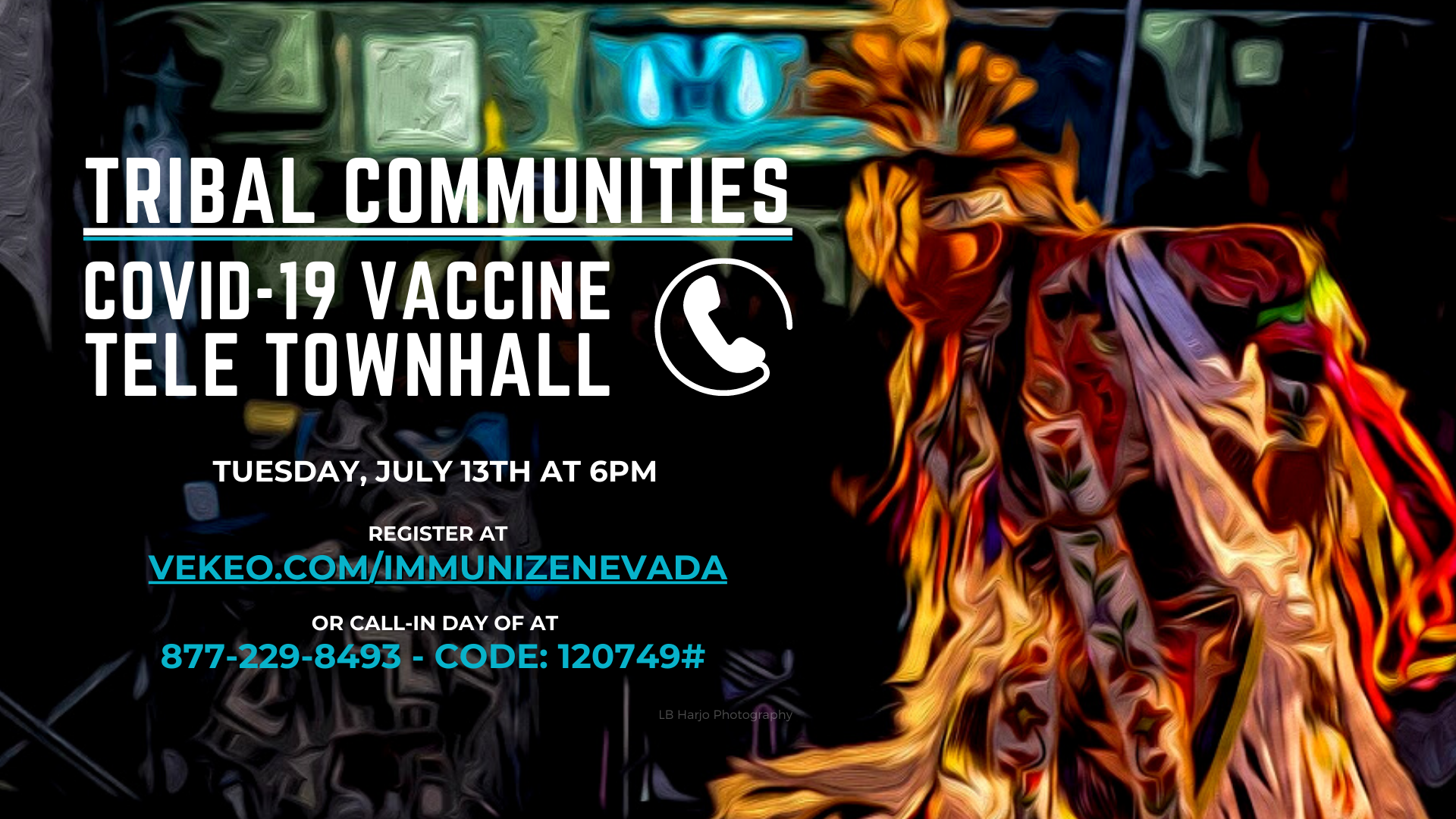 Come ask your questions about the COVID-19 vaccines at this telephone townhall event. Join us over the phone or on Facebook Live to learn more! 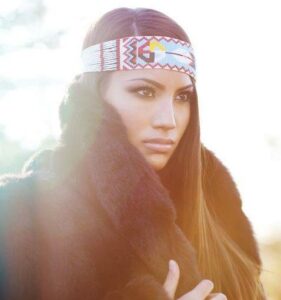 Ashley Callingbull is a Cree First Nations woman from the Enoch Cree Nation in the province of Alberta, Canada. She is very devoted to her culture and people, and takes pride in her Cree heritage, and has shown this through her volunteer work with community Elders and Indigenous youth across North America. By the time Ashley reached 10 years old; she had consecutively won all Enoch’s princess crowns. She is a professionally trained dancer in tap, ballet, jazz, pointe and performed in the Nutcracker.

Ashley’s interest in acting led her to starring in a commercial for The Hudson Bay, and has appeared in television mini-series, acted in countless stage performances and has lent her voice for cartoons. She appears in several television shows that include Tribal, The Amazing Race Canada, and Blackstone. These television shows air on CRAVE, APTN, Showcase, Maori Television in New Zealand and Hulu Television in the United States. Ashley is also featured in CBC’s 8th Fire Series and the Catch The Dream Series. Ashley also appears on CTV The Social, Etalk Canada, CP 24 News, and many more. Her youth foreshadowed her young adulthood, as she continued with acting and dancing.

In June 2010, Ashley placed 2nd Runner up in the Miss Universe Canada 2010 Pageant. She is the first Cree First Nations Woman to achieve this goal. During her reign as a Miss Universe Canada 2010 finalist, she traveled to hospitals and schools speaking about her life and reaching out to others. The loss of some very close family members have led Ashley to also support the Stollery Children’s Hospital, Walk for the Cure, Run for the Lung and mentor underprivileged aboriginal youth. Ashley is also currently the Youth Representative for the Stollery Family Centered Care Network for the Stollery Children’s Hospital Foundation.

Ashley was chosen as Miss Canada in 2010 and represented her nation in international pageants in China, Europe and Barbados.

Ashley is also an international motivational speaker and role model for many educational institutions, workshops, conferences and award ceremonies. Ashley has spoken at Harvard University, Yale University, University of Toronto, and Boston University as the keynote speaker for an All Ivy Native Council, TED Talks and WE Day. Ashley’s hard work and charity work was recognized as she received the Role Model Award at the Dreamcatcher Gala and she also received the Top 20 Under 30 Award in Canada. Ashley also received a role model award from the United Nations in October 2015 for Global Dignity Day.

Ashley was the reigning Mrs Universe 2015 and a Canadian Activist for First Nations Rights and environmental causes in Canada. Ashley is also a spokesperson and model for the Nike N7 organization, and has completed campaigns with RW&Co, Hello Fresh, Go Rving Canada Nintendo Canada, Hillberg and Berk, Coterie (New York Fashion Week), and many more.

Arlan D. Melendez is the Chairman of the Reno-Sparks Indian Colony, a federally recognized Tribal Government representing Paiute, Shoshone and Washoe people.  Chairman Melendez was first elected to the Tribal Council in 1987 and has served on the Tribal Council for 33 years, 30 years as Chairman.

Under Chairman Melendez’s leadership, the RSIC has maintained a strong and fiscally sound government. Chairman Melendez has served on the U.S. Secretary of Health and Human Services Tribal Advisory Committee (STAC) as an advocate for Indian Health Care and has played a vital role in the COVID-19 Pandemic for Indian Country. He also, has received a life-time achievement award from the National Indian Health Service which publicly honored Chairman Melendez for his significant contributions to their respective national organization.

Chairman Melendez serves as a Tribal Council Liaison and Public Information Officer Assistant in RSIC’s Emergency Unified Command System. His leadership and experience has helped Nevada Tribes collaborate with partners at the Federal, State and Local levels to support tribal response to COVID-19 since the virus first appeared in early 2020.

Under Chairman Melendez’s leadership during COVID-19, RSIC has created new policies to include COVID-19 safety protocols in the best interest of RSIC’s tribal members, residents and employees. RSIC has implemented specific services to tribal members who have been directly impacted by the virus. RSIC even created virtual and social media spaces to connect with RSIC’s tribal members and administration for social distancing. RSIC has held COVID-19 Testing PODs and COVID-19 Vaccines PODs in conjunction with the Reno-Sparks Tribal Health Center, IHS and state/local agencies. And so much more.

Melendez is also an Armed Forces veteran having served in the United States Marine Corp during the Vietnam conflict. He graduated from Truckee Meadows Community College and attended the University of Nevada. 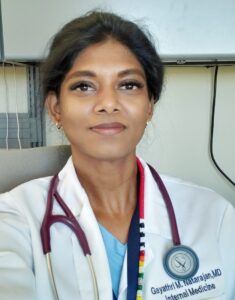 Dr. Gayathri Natarajan obtained her Doctorate of Medicine (MD) Internal Medicine from Allegheny General Hospital, Drexel College of Medicine in Pittsburgh, Pennsylvania.  She grew up in India and moved to the United States in 2004. She considers Reno home since 2016.  She has over 18 years of experience in the medical field working in various capacities from clinical direct patient care, to being principal investigator running clinical trials for major pharmaceuticals. Her heart has always been in primary care where she could make a real difference in the everyday lives of her patients. She feels working at the Tribal Health Center is her calling. She has seen many parallels between the tribal communities in the Reno Sparks area, and her own Indian culture. She feels right at home helping her patients whom she considers family. She is passionate about treating chronic illness such as diabetes, hypertension, obesity without medications. She has been recognized by her community for her leadership role during COVID pandemic where she continues to lead the community as the Subject Matter expert of Unified Command.

In her free time, she likes to hike, travel, cook and try new experiences. She is passionate about women’s rights, environmentalism and tries to live a simple carbon neutral life. 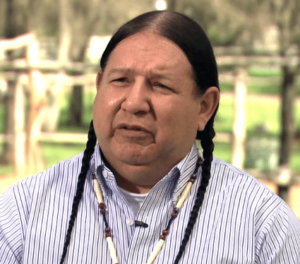 Dr. Art Martinez is a member of the Chumash tribe, and a clinical psychologist.  Dr. Art Martinez shares a unique melding of cultural and clinical experiences.  Dr. Martinez has served as an expert witness in more than 3500 cases which served most all superior courts within California and in over 30 other state courts, US federal district courts and tribal court jurisdictions.  Dr. Art serve as the clinical psychologist and Head of Service of several tribal mental health programs. In 2018 Art became the Co-Director of the Children’s Bureau Quality Improvement Center entitled the Center for Native Child and Family Resilience.  In 2015 Dr. Art joined the Children’s Bureau established Center for Capacity Building for Tribes as the Senior Services Advisor for Tribal Capacity Building in a continuation of service to tribal communities. In the past he served as the executive and clinical director of The Child and Family Institute, one of the principal Mental Health contractors for Sacramento County Child Protective and Children’s Mental Health Services.  Dr. Art previously founded and directed the Washoe Family Trauma Healing Center in Gardnerville, Nevada.  This center served as the primary provider of mental health and child assessments for dependency matters for Tribal court jurisdictions in the State of Nevada.  Dr. Art served as a trainer and consultant in culturally competent evaluation and program development.  In that commitment, he served as a technical expert groups for the three centers of SAMHSA.  In 1999 Art was appointed by the Secretary of Health and Human services to the National Advisory Council for SAMHSA and the Center for Mental Health Services.   His doctoral research and dissertation focused upon the use of traditional Native American health approaches within clinical interventions with Native American families.  Dr. Art’s master’s thesis specifically addressed the salient issues of Indian Child Welfare in America.  Over the past thirty-five years Dr. Art has worked for tribal governments and organizations in the development and provision of services to children and families.   He has taught over 50 courses and seminars involving the dynamics of Children’s mental health, substance abuse and Mental Health issues in Native communities.  Dr. Art was the past Director of the department of Marriage, Child and Family therapy at the San Diego Campus of Alliant University as well as Director of Counseling and Psychological Services for UC Merced.  He serves as a nationally known consultant in issues involving Native Americans, Native American Family Dynamics, Indian Child Welfare, Native American Child Development, and Native American Traditional values and health interventions. 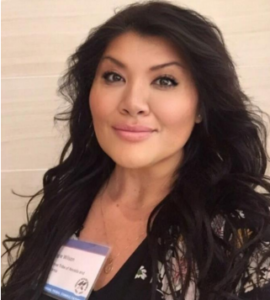 Angie Wilson, enrolled member of the Pit River Tribe of California and Klamath/Modoc descendant, serves as the Tribal Administrator for the Reno Sparks Indian Colony (RSIC). In addition, she leads the RSIC Covid-19 mitigation response as the Unified Commander, working hand-in-hand with key personnel in managing the Covid-19 response overall.

Ms. Wilson’s career has spanned more than 22 years in Tribal Health Administration, Policy and Tribal Advocacy. She has dedicated her career working with Tribal Governments and for Tribal Communities as an inherent responsibility.

In 2014, Nevada Senator Roberson appointed Angie to the Nevada Health Exchange Board of Directors, becoming the first American Indian in the Nation to serve in this capacity within a State or Federal Health Exchange.